Mastering the scope of the directives in AngularJS 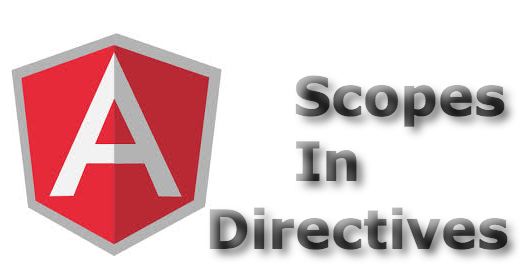 Directives are one of the most powerful features of AngularJS. You can imagine them as building blocks ( aka re-usable components ) of any AngularJS application. Mastering all the directives, is totally out of this article’s scope. For that, I would really recommend this book; it covers everything you need to know about directives. Here, we’ll discuss one aspect of directives called : "Directive scope".

Unlike the other MVC frameworks, AngularJS doesn't have specific classes or functions to create model objects. Instead, AngularJS extended the raw JavaScript objects with custom methods and properties. These objects, also known as scope in AngularJS terms, work as a glue between the view and other parts ( directives, controllers and services ) inside the AngularJS application.

Whenever the AngularJS application is bootstrapped, a rootScope object is created. Each scope created by controllers, directives and services are prototypically inherited from rootScope. AngularJS documentation is one of the best resources to learn how scope inheritance works: see Scopes in AngularJS. Understanding how scope inheritance works will be useful in following sections.

Scope inside a directive #

Note: This section assumes you've prior knowledge of creating a simple directive

All directives have a scope associated with them. They use this scope for accessing data/methods inside the template and link function. By default, unless explicitly set, directives don't create their own scope. Therefore, directives use their parent scope ( usually a controller ) as their own.

In the above example, we created a directive by returning a DDO from the function. There are a lot of properties of the DDO to learn, but here we're just going to discuss the scope property, because, the values of scope property decides how the actual scope is created and used inside a directive. These values can be either "false", "true" or "{}". In the following sections, we'll see how each of these affects directive's behaviour.

Let's try another example. We'll create simple directive to render a div and a textbox that can show and change a name. The name property gets the initial value from the Ctrl1 scope ( parent scope of the directive ).

Now it's time for the directive to get its own scope. This is achieved by setting a "true" value to the scope property of the DDO. When directive scope is set to "true", AngularJS will create a new scope object and assign to the directive. This newly created scope object is prototypically inherited from its parent scope ( the controller scope where it's been used ).

Let's look at the following fiddle to make it more clear :

First, try clicking on the header. We can see that the name gets reversed inside controller Ctrl1 and the directive. Next, change the name inside the textbox; the parent scope is not at all affected.

Note: Clicking on header again, makes no changes to the directive scope. I guess this is because the ng-model will create a new name property only when the textbox value is changed. Before this, name property inside directive was referring to it's parent scope ( through prototype chain )

This is the most interesting section. Till now, we saw two situations for directive scope creation. In the third type, we are going to set scope property in DDO to an Object literal. When an object literal is passed to the scope property, things are bit different. This time, there will be a new scope created for the directive, but it will not be inherited from the parent scope. This new scope also known as Isolated scope because it is completely detached from its parent scope.

So far, this is the recommended way of setting the scope on DDO while creating custom directives. Why? Because:

Though it's called as an Isolated scope, AngularJS allows to communicate with the parent scope using some special symbols knows as prefixes. Because of course there are still situations where the directive needs to be able to exchange data with parent scope. The next section is dedicated to Isolated scope and its properties.

See the below fiddle:

We just created a directive with an isolated scope. Notice, even the parent scope has a name "Harry", the textbox inside directive is blank. This is because of the new Isolated scope doesn't know anything about its parent scope.

But, can we pass some values from the parent scope to the directives now?

Yes ! Not only that, we might need to handle situations like invoking callbacks in parent scope, two-way binding between parent & directives scope ..etc

Just go through the below fiddle, and look at the "HTML", "JavaScript" and "Results" tabs.

Let's try to understand how this works. Take the JavaScript code first:

It's clear that, the controller MainCtrl creates the parent scope. This parent scope has following properties and methods.

Similarly, we've created our directive in Isolated scope by setting an object literal in the DDO. Notice our scope object has some properties now :

All these prefixes receives data from the attributes of the directive element. Let's take another look at the HTML code:

When the directive encounters a prefix in the scope property, it will look for an attribute ( with same property name ) on directive's html element. However, we can provide a different mapping between property and attributes. This is done by giving a separate attribute name after the prefix. Look at below code to make it more clear.

The above will be mapped to an attribute "name" in the directive. Now let's see what happens if we change the code like below:

At this time, the name property will be looking for an attribute "parent-name" in the html element to get its value. Simply, any string after the Prefixes should match the attribute name.

Note : If you gets confused in any of the sections below, have a look at the demo code ( HTML,JS ) and come back

I know that AngularJS have made these things a little bit difficult to understand. Especially when it comes to the random naming conventions they'd chosen. If you’re still confused, I would recommend having a look at the below article:

That's it ! This post ended up becoming much longer than I expected, because I wanted to include everything I know. I hope everyone enjoyed reading this. If you find any errors I would really appreciate it if you guys could send me your corrections and comments –– the comment box is made just for that. Thanks everyone !!

Special thanks to David Tulip for proof-reading and helping me to fix grammatical errors.